Aegon demonstrates the power of collaboration

What started with one department now seems to have spread like ripples on a pond: working across national borders with DMSforLegal in combination with Office 365. This further roll-out appears to be more than just the result of ‘a solution meeting a need’. An uncomplicated collaboration between the parties involved also appears to have had a major impact on maximising user acceptance.

Here’s what they have to say: Mascha Meewis and Gijs Zuijderduin of Aegon and Liesbeth van Woerkom of Epona Legal.

‘In the Asset Management department, we were looking for a solution that would enable us to work together with several people from different countries. The application had to facilitate our mission to work in virtual teams. In addition, this working method had to be secure and intuitive. We weren’t looking for complexity, we were looking for simplicity,’ begins Mascha, Aegon’s Global Project Manager for Asset Management. ‘My colleague, Gijs, immediately came up with DMSforLegal in combination with Office 365. After a short pilot phase, we were off.’

Gijs, Head of IT & Change Delivery (ad interim) of Aegon Corporate Systems: ‘We had just successfully implemented this solution in the Group Legal department, partly due to the intensive collaboration with our supplier Epona Legal. I knew that Mascha would really like this. Do you know what was so special? Epona Legal started out as the ‘underdog’ with whom we thought we were taking a risk. Since then, its popularity has grown unbelievably. Not only because of the functionalities, but also through the power of collaboration. Something that Epona Legal is constantly working hard on.’

See it with your own eyes

It all started in 2018. Gijs went looking for a specific solution for managing and collaborating on documents for the Group Legal department. Gijs: ‘After a thorough investigation of the market, we drew up a shortlist of several providers based on our particular wishes. It included all the usual parties, with the exception of Epona Legal. They stood out because of their power of persuasion. I wanted to see for myself whether what they claimed could really be so simple.

‘Collaboration is crucial, but not always achievable.’

What’s more, the solution offered by Epona Legal was also the most economical. As an IT professional, it’s always a risk to join forces with an unknown party. I mean, the decision could have proved badly wrong. But I really had to see their solution with my own eyes. Since we are a real Microsoft organisation, the combination with Office 365 appealed to me very much.’ 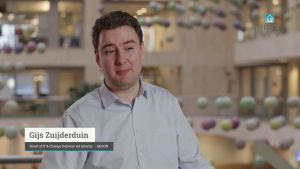 Gijs took a real risk to only ask Epona Legal to set up a test environment. Here’s what he had to say: ‘If this project were to fail, we would have lost the time and cost of setting up the test environment. Fortunately, it quickly became clear during the tender process that this investment was manageable.’

The pilot was set up in no time and the department started working with some workflows. Gijs: ‘Collaboration is crucial, but not always achievable. This has proven to be the case with other IT projects. We were working Agile on this, and Epona Legal was fantastically good at that, as became apparent during the proof of concept. It was striking how well the collaboration with Epona Legal went.’

Liesbeth van Woerkom, project manager at Epona Legal, adds: ‘From everyday practice, we know how important the collaboration between ICT, the provider and the users themselves is. Introducing a Legal DMS and an email management system – certainly in a corporate legal department – runs much smoother if these parties can work together in an uncomplicated way. For us, Aegon is living proof of that.’

Liesbeth has been impressed by the collaboration with Gijs and his team. According to her, Gijs’s coordinating role can certainly be termed unique. Time and time again, Gijs had everything extremely well prepared. Office 365 was ready and the software packaging was complete. Complex problems with Citrix were solved and, when necessary, Gijs flew in IT colleagues from America. Within no time, the pilot group was able to start experimenting.’

‘We can now work together securely around the world without any problems.’

The department was ready and Mascha from Asset Management was eager to get started. Mascha: ‘We work in what we call virtual teams. People from different offices around the world all working together. Of course, you do need a working environment that can facilitate that. We started with a project group and immediately found DMSforLegal a really nice application to work with. Liesbeth assisted us throughout the entire process. Always honest and with an incredible determination to make it a success. If she anticipated any risks, she was the one who raised the alarm. She was always there for us.’

All the documents and emails are stored in Office 365, while the application is specifically designed for common legal work flows. Things like comparing versions of contracts, searching in very similar content or the creation by end-users of hundreds of files with the right permissions. Mascha: ‘We can now work together securely around the world without any problems.’

Mascha concludes: ‘It’s the best of both worlds: a legal DMS together with standard Office 365. Combined with the golden partnership between us and Epona Legal, this solution contributes to the profitable and sustainable growth of our department.’